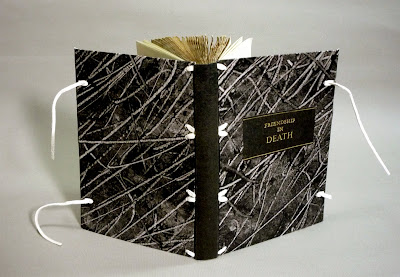 Friendship in Death in Twenty Letters from the Dead to the Living, translated from the Moral Essays of the Meffieurs du Port Royal. London, 1729, second edition,187mm x 124mm, 122 pgs. 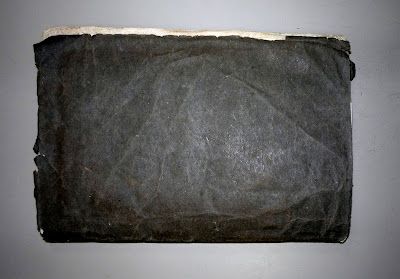 This book was bound in two layers of paper wrapped around the sewn pages and glued to the spine. The paper covers were separating on the original binding and the sewing had broken in several places. On close inspection, I realized the cover papers were not original to the book because they were machine made. The sewing through the folds of the sections was also not original. There were holes showing that the book had been side sewn first. 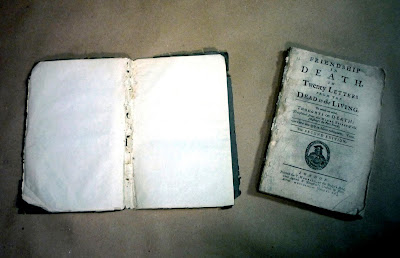 The cover papers were falling off so they were easily pulled off. The front and back pages were heavily discolored, most likely from the original cover paper which must have been a dark grey. 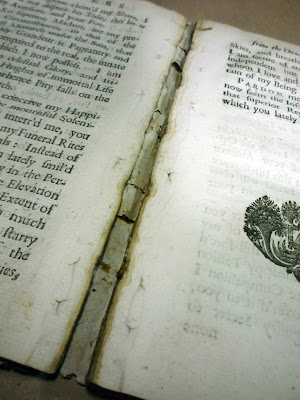 Here you can see some of the holes from the earlier sewing. 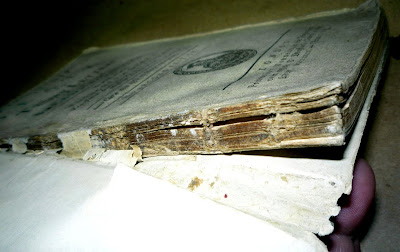 The sewing was broken in several places and the glue on the spine had cracked. 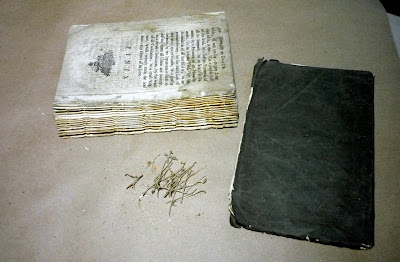 I disbound the book and examined the pages. There were tears and some breaks at the outer folds of some of the sections. The front and back pages felt weak and soft when compared with the rest of the book. 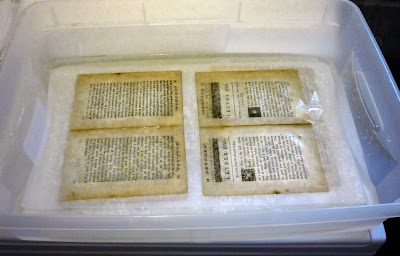 The first and last pages were washed and lightly sized with methylcellulose. After seeing the improvement to the color and feel of these pages, I washed the remaining pages. After drying, they did not seem to need resizing. 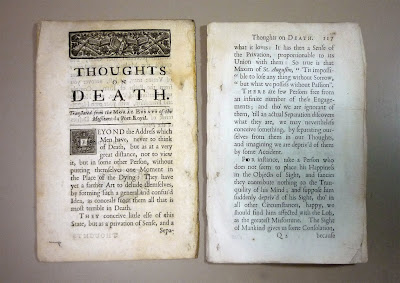 On the left before and the right after washing. 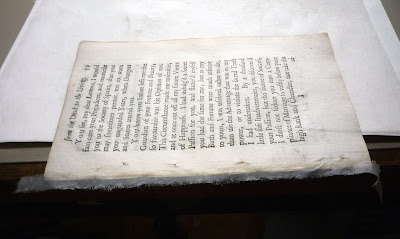 Using a thin Japanese tissue, I guarded the folds of all the sections. 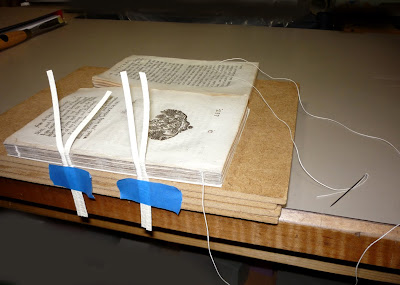 The pages were sewn on double tawed goatskin thongs. Here, I taped the thongs in position for sewing so I would not need to set up my sewing frame. 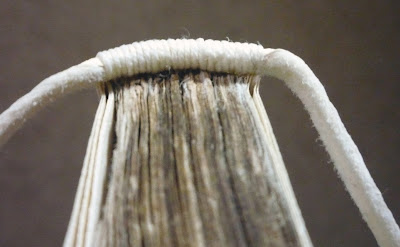 The endbands were sewn on leather thongs. 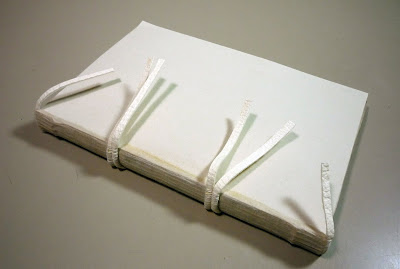 After the spine was lined with Japanese tissue, I pasted between the thongs. 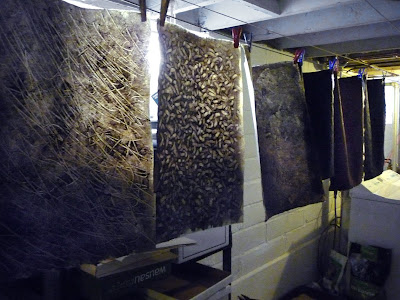 For the cover, I did a three pieced laced on paper case. The spine was a piece of black walnut dyed handmade flax paper. I used a paste finish over the natural flax handmade paper for cover pieces. These papers were some that I made at the University of Iowa (PC4 case papers). I made several different patterns when I was decorating the paper. To make the binding, I started with the spine piece. I trimmed the paper to the height plus the turn edges but left the width the size of the piece of paper. This was a little shorter than the width of the pages and the spine. I punched holes along the spine fold for the thongs and laced the spine on. 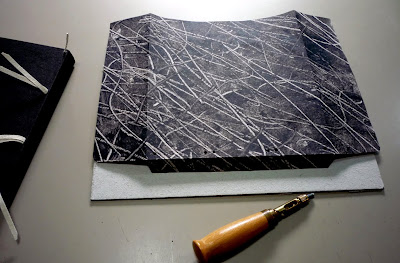 I trimmed the cover pieces and folded them to the height of the cover. I also folded the spine edge and made the corresponding holes. I then laced the sides on so a measure could be made for the fore edge and yapp edge folds. 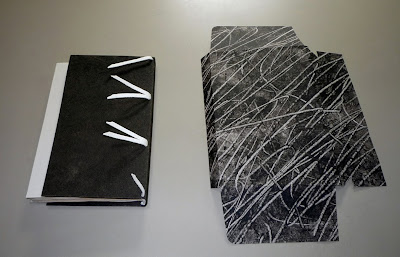 I then removed the sides so the fore edge could be trimmed and the slot and tabs cut for joining the corners. 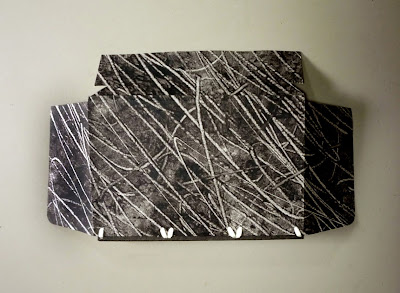 The final assembly begins with lacing the cover papers on. 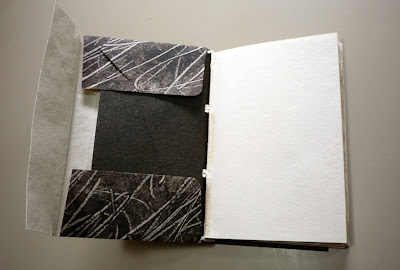 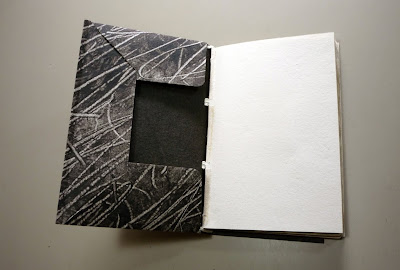 The tab then is slipped into the slots securing the corners. This binding can be easily removed if necessary. Leather ties were added at the fore edge. 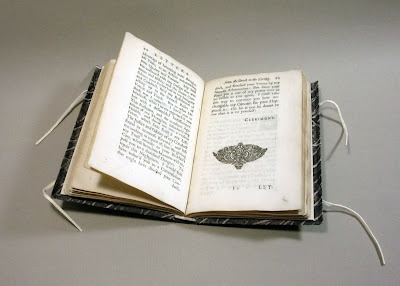 The book is part of the Bind-O-Rama exhibition "Artistically Reversible: Where Conservation and Art Meet."This exhibition is a demonstration the ideas of the Tomorrow’s Past movement, which promotes work that demonstrates a high regard for the integrity of the original object, the application of current conservation best practices, and an innovative interpretation of book structure and aesthetics. 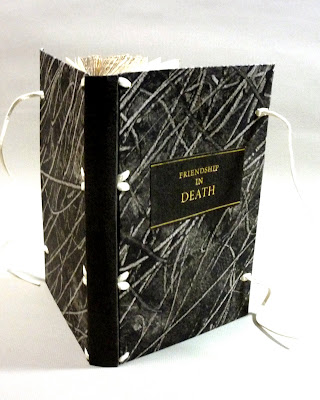