This copy of the Rubaiyat by Omar Khayyam was illustrated by Willy Pogany. The illustrations were all printed in black on a white paper so I decided to do the binding in black goatskin with silver tooling. This binding was also my first attempt  to add jewels to a binding. 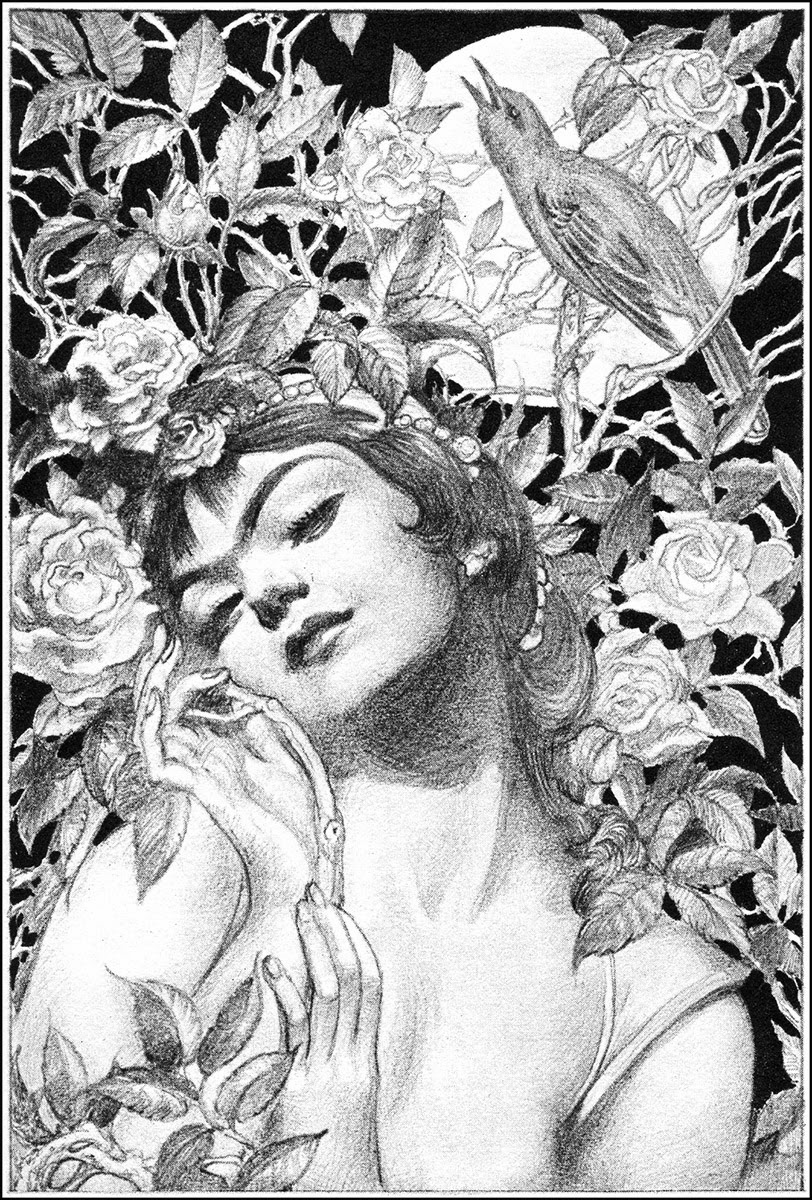 This is one of the illustrations by Pogany. After reading the poem I realized that a peacock, which is often used in the designs for this book,  is not part of the poem; instead it mentions a nightingale and a rose. 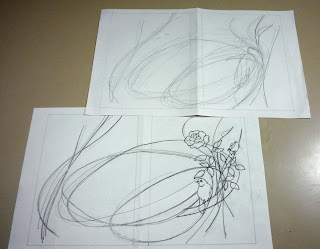 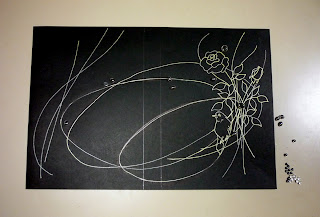 I started with a rough sketch  and then redrew it many times, with the last drawing done in silver on black paper. To add something new, I used hematite cabochons in silver bezel cups. In this photo I was trying to decide where they would go in relation to the drawing 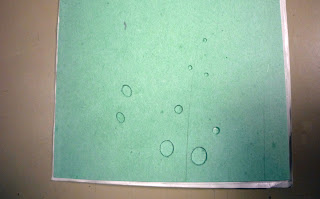 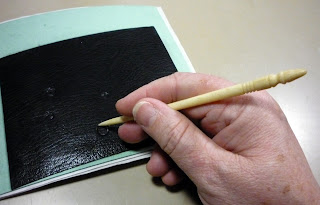 I did some test runs to decide how I would mount the hematites. I started cutting out recesses in the book boards and pasting on the leather, working it down into the recesses with a bone tool. 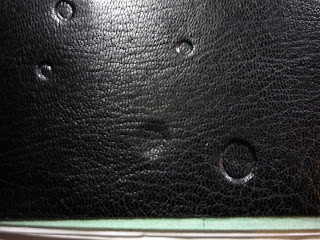 Here you can see how the tool helped to push the leather tight into the recesses. It took several attempts to figure out how large the three different sizes of recesses had to be for the bezel cups to fit with the added thickness of the leather. 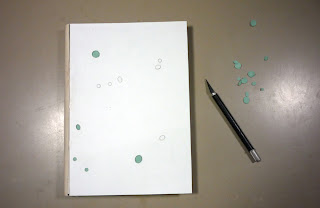 I sewed the book on tapes and added a hollow spine. Both sides of the board were lined, then I cut out the recesses. 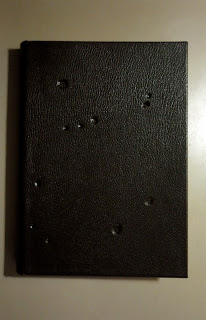 I decided to use a stylus for the tooling and cut out Bristol board templates. Because the lines overlapped a lot where the bird and the rose were, I cut a separate template for them and split the other one at the spine. I cut and taped the lines like I did in the Venus and Adonis binding. After the lines had been blind tooled, I slid a piece of the foil under the template and tooled on the silver. 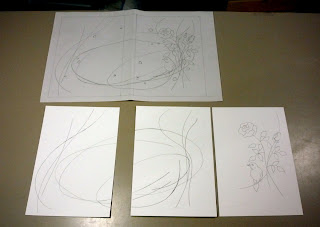 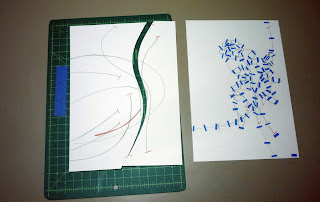 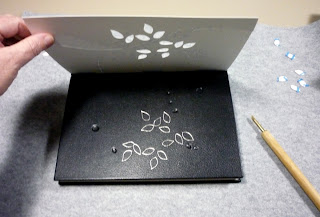 I tooled over the shapes several times to get a even foiled lines. 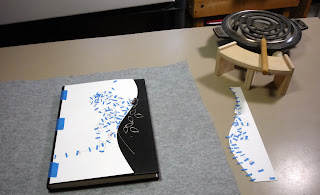 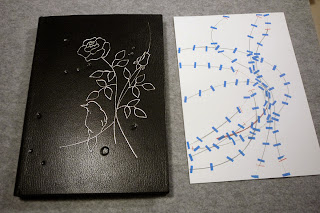 This shows the cover after the first template was completed and the next one is ready to use. 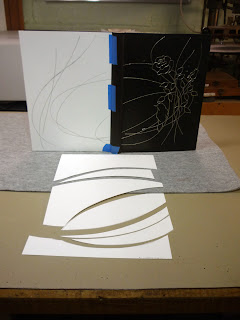 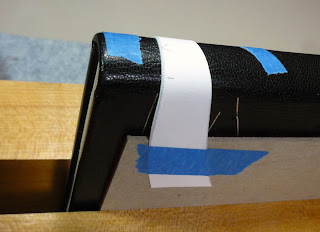 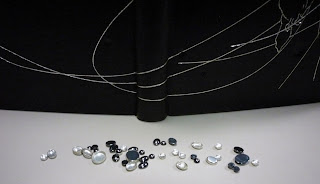 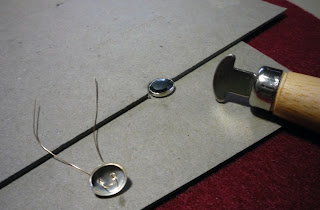 For some of the larger mounts, I needed to remove the leather so that the stone would set down into the cover. I then made corresponding holes in the board and laced the wires in place. 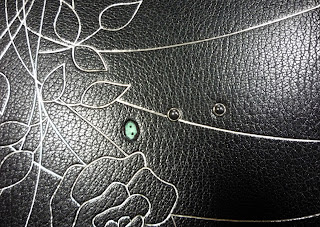 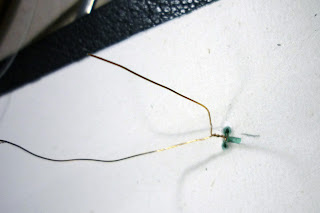 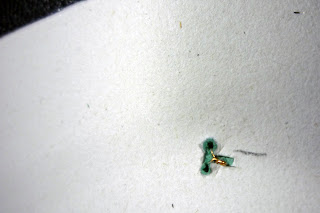 On the back cover, I made a small recess so after the wire was twisted together and the extra wire cut off, the ends would lie down below the surface.  I then filled the area with putty and sanded it smooth, then did the infills and pasted the endpapers down over them. 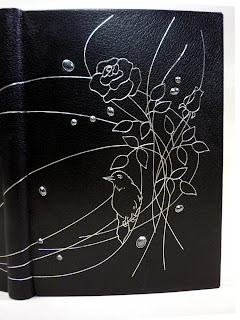 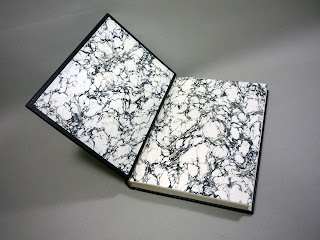 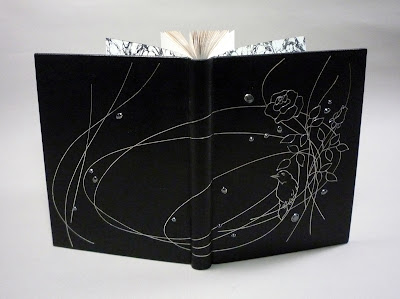